It was raining cats and dogs last night and I drove home with a visibility of near zero. While driving, I was thinking of doing something at home to comfort myself in this rather sombre weather and emotion. Reached home, took a quick hot shower, prepared a mug of hot tea, brought my laptop into my bedroom, dimmed the lights and watched this. 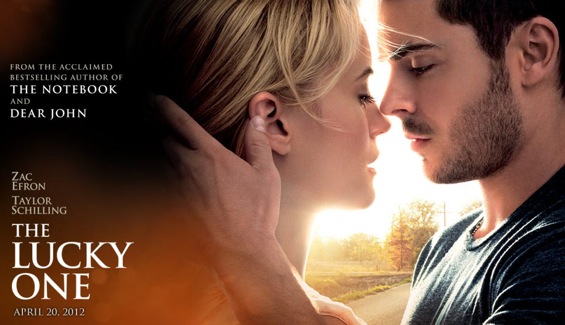 Yeap, the Lucky One.

It tells the story of a marine cop, Logan, who fought in the wars with his platoon. While fighting off the enemy, his platoon which initially had shortly crossed paths with another platoon got ambushed and all of them at the time were shot, except for Logan.

The next day, the remaining army including Logan was guarding around the rumble from the wars. Logan caught a glimpse of a photo buried under a small rumble and bent down to pick it up. At exactly the same time, the enemy had shot a missile at their group of army who were still guarding the area and only Logan survived. All thanks to the photo.

Now, the photo is actually of a beautiful girl, with a handwritten message on the back of it saying 'Keep Safe'. Feeling like he owed the girl his life, Logan decided to search for the girl to thank her in person.

“Finding something like that in a war was like finding an angel in hell.  So I kept it with me.  And I survived a lot of things I had no right to.  I promised myself if I got out I’d find that girl and thank her.”

“Everyone has their own destiny.  Not everyone makes the choice to follow it.  I’m lucky I did"


Quite strong messages there, don't you think? About our Qada' and Qadar and the likes.
Am a bit teary and emotional these days. I guess I need to have some time to myself and find answers to my questions.

Anyway, go watch it on DVD! Inspiring and makes you want to fall in love and hang in there  no matter what hits you.
Posted by amyalmohtar at 12:12 PM