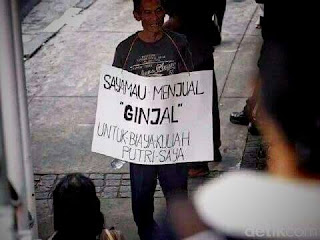 Found this while scrolling through my newsfeed on Facebook and this reminded me of my father.

A few months before my graduation day (years ago of course..hehe), I told my father about the convocation ceremony. To which he congratulated me and told me something I won't forget.

"Papa is sorry because Papa can't afford the money to bring all of us there. Maybe Papa can jual the tanah here so we can all attend your convocation."

But Allah is Maha Kaya.

I was able to secure a job right after I finished studying and with that little money, they could all go to Penang to see their kakak graduate :')

Today, we still don't have much, but alhamdulillah, we still have each other ♥

Posted by amyalmohtar at 12:34 AM No comments:

of faith and food

After a longggg usrah hiatus, yesterday we were all united again talking about the 4 women who were promised Jannah. I'm not gonna go over them but just gonna share the lessons that I've learned. We have only started with Asiah, Firaun's wife,yesterday so here goes :

That we will be tested with what we love most and the most dear to us.
Say if we love our wealth a little bit too much, Allah will test us with our wealth, maybe lost of wealth or tested with abundance of wealth but we won't be thankful for it. Firaun was tested with his wealth.

That Allah's protection is much more than a mother's protection.
When Allah gave revelation for Prophet Musa to be placed in a basket and put into a river, Musa's mother confidently let him go into the river with tawakal and full faith that Musa will be in good hands.

That what can block you from seeing the truth is arrogance.
When Prophet Musa was born, he was blessed by Allah in a way that if anyone who looks at him, their hearts will be filled with love. Even the midwife who helped deliver Musa (and at the same time is also Firaun's 'spy') fell in love with the bundle of love and did not report his birth to Firaun. But Firaun didn't have any love for Musa at all because of his arrogance.

That we should continue learning our deen even if our spouses are not doing the same.
Nowadays, usually it is the women who go to majlis ilmu or majlis agama. The number of men most of the time doesn't even reach half of the female audience, so some wives are actually complaining that it is them who are always on their feet trying to better themselves whilst their husband prefer to stay at home. However, Allah shows that Asiah has a tyrant husband but she never complains.

That it is easy to associate a person with what is shown on social media.
Don't judge anyone outwardly. Don't have opinion on anything. She might be hiding her faith in her heart.

And the one I love the most is this one.

That you can be strong with Allah despite whatever that you go through.
When my naqibah (the sister who leads the usrah) was in Yemen, she had to wear the niqab because that is what everyone is wearing. But when she wears the niqab, it feels as if she is alone with Allah, that she can freely do zikir whenever and wherever she wants because her face is covered, so people won't say she is crazy per se for talking or chanting to herself. And even if she smirks or do all kinds of facial expressions, others won't be able to see it so it is sort of an escapism from things that can bring trouble to her. She will only need to answer to Allah. I was like wow, I never thought of it that way. But it doesn't mean that I'm gonna wear just the same okay? Not yet, long way to go. Not sure if I can even go there :P

I had an off day today and decided to go and try out that Cronut from Dotty's that everyone is raving about in Instagram. Go search! Hehe. I dragged my partner-in-crime along, my bestfriend, Mimi. 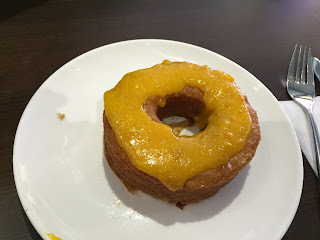 Here you go.
This Salted Egg Yolk Cronut is priced at RM11 per piece and I kid you not, for that price, it is so worth it! The layers of crispiness and the mix of sweet and salty filling is just to-die-for.
You must try this as soon as possible. 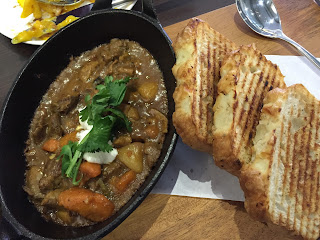 I had this lamb stew which was recommended by the very helpful waiter. Not too bad although I think they could use a little bit more flavour to add to it. I meant the lamb stew, not the waiter. Hehe

After that, we had a quick stop at Paradigm Mall to fix my phone. I couldn't send out emails from my phone until it is finally fixed today. Hooray! Had to do it from my laptop every time. After getting it fixed, I had to send my date home a little bit earlier because she had an emergency.

Going to be on an early flight tomorrow and I have not packed my bags yet. Until I see you on my next post, take care :)

Posted by amyalmohtar at 10:54 PM No comments: