You know what I've been craving for, for the past few weeks?

Here's how it looks like, credits to Google images Or a fancier version of it 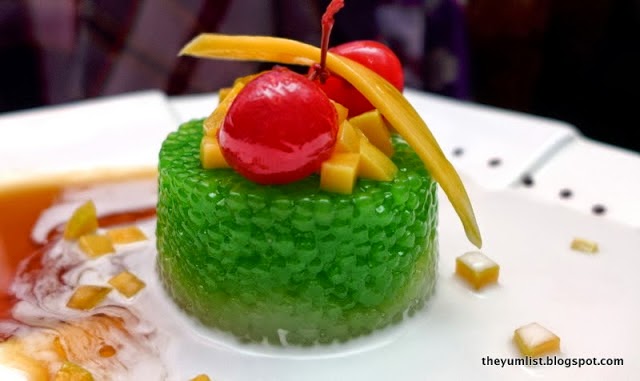 Haa.. the above version has got some colourings and garnishing.

Anyways, for the past few weeks I've been searching high and low for it at the Ramadhan bazaars, but surprisingly, no one sells them! I heard that it cools off the body and despite the heat that we've been facing since before Ramadhan, I couldn't find them sold anywhere, well, unless if I have them ordered at restaurants (read : Madam Kwan's). But, takkan la kan. Nanges la pergi Madam Kwan's just to order sago gula Melaka.

So today, I nekad to make sago gula Melaka on my own. I saw a cooking show doing a demo on how to make one sometime last week, so I guess it's a sign that I should make one for myself :P Actually it was very simple. Heee. I just needed the little sago, santan (coconut milk), gula Melaka (palm sugar) and pandan leaves. You can get the step-by-step guide here. I ran out of pandan leaves in my house, so mine didn't smell as good as they should've been, but it's okay 'cos they taste awesome :)) Anything with santan is of course awesome la  >.<

That was what I had for my buka puasa, aside from Keknul's chocolate cake. Felt so contented that I finally get to make something that I love eating, on my own. I gotta start being busy in the kitchen la kan. Cooking might just be something I could fall in love with!