what is lost is not lost forever

My grandaunt, Nek Ura, has been called back to the Creator today, at approximately 3pm. 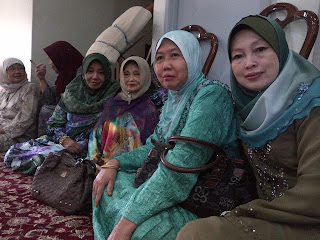 Nek Ura has been admitted to the hospital since starting of Eid and was pretty much dependent on life-support machines since then. It started with her blocked breathing system where her food has wrongly entered the breathing airways instead of the normal food pipes (maybe due to eating too fast). A few days after she was admitted, she seemed to be progressing well but as soon as she was about to be discharged, the doctor found out that she has access of mucus in her heart.

The last I heard about nenek from my mum (prior to today's news) was that she had to undergo an operation to put a hole in her throat so that she can breathe easily and it is also easier for the doctors to see what is happening in her breathing airways, blocked or otherwise. And then, today's news.

Nek Ura was a strong-willed gramps, I tell ya. Imagine at that age, she was still fit and healthy, no other medical condition prior to this. She loves to travel along with us children and the grandchildren. Starting the end of last year alone, she flew from Kuching to KL, Kedah in April and recently KL again in June, for both my cousin's weddings and my cousin going to college and mind you, the schedule for both weddings at the time was very hectic, for the whole family. Since my parents are gonna be here in KL in December, my aunt has also planned for Nek Ura to join us, knowing very well she would nod her head off in enthusiasm. Allah loves her more, I guess. She's off to the most beautiful place ever.

In a way, I feel like maybe it is really a good time for Nek Ura to go. She could be missing Aneez, my niece who just recently passed away in Ramadhan due to an asthma atack, as they are also very close to each other. At least, Aneez has a companion dear to her, although I don't doubt at all that she has found some new friends to be her companions in the Hereafter.

May both of them rest in peace.

What is with you must vanish: what is with Allah will endure. And We will certainly bestow, on those who patiently persevere, their reward according to the best of their actions
Qur'an (16:96)

Posted by amyalmohtar at 8:09 PM